18/5/22.  Technical difficulties with the rear sight raiser on his FWB 600 meant Bri didn't submit any cards this night but, silver lining, that allowed him to pinch a shot or two with Les' new shooting iron - an Anschutz 9015. 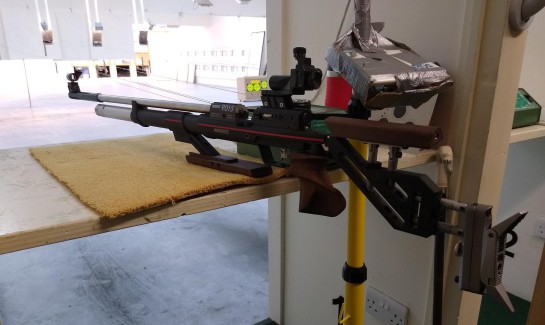 And very, very nice it is too.  Bl**dy loud though and that trigger is light beyond belief - a sparrow's fart would set it off!

As we're not a dedicated, hardcore 10m Club, we don't have too many top-end guns of this type and it was interesting to see the evolution between the near 40 year old FWB 600 and this up-to-the-minute gem.  Both Olympic Standard in their day, the Annie is hyper adjustable for fit and the weight and balance are much more forgiving.

Of course, a super new and shiny gun won't get you the points on its own - you still have to do your bit - but Les put in a 74 on it's first outing, 15 up on his previous and doubtless that'll improve as he gets familiar with it.

Also showing an upward trajectory, Nick, not bothering with any of that boring, time consuming practice nonsense, rattled off some shots for a 55 which was enough to put him in 2nd place.

20/4/22.  Just two shooters at Denwood this week.  Paul S experimented with a scoped Umarex Winchester CO2 rifle.  Normally a good rifle shot, his 39 was out of character so we'll put it down to the gun and be sure that he'll bounce back.

Sporting a more dedicated AA S400 MPR, Les shot a 59 on his first entry for the highest score after Bri, who, it must be said, spends more time than most on standing shots.

Still early though and we're waiting for the Waulkmill Warriors to get some cards in.  Plus there's also the threat of Bri setting up some targets on the Denwood 50m range so the "downstairs" guys with their sub 12s can have a go.

6/4/22.  Three shooters tonight - Nick, Bri and, putting his pistols aside for a moment, Steve P.

Nick broke out his fun-sized Webley for a somewhat underwhelming 43.  More a reflection on the rifle rather than the shooter as I think the dinky little junior gun was having trouble projecting pellets the full 10m distance.

Steve P was running late but got pressed into having a go.  Using the scoped HW30S, he took the unorthodox approach of shooting his first card from the right shoulder and the second from the left.

We may never know why.

And we certainly don't know why he got a 19 from his normal shooting shoulder and a much better 37 from his left.

Closing proceedings again was Bri.  With the own gun advantage, he scored a 72.

Our next Denwood session will be on the 50m range only - indoors being off limits for a week - so Bri may be setting up this comp outdoors and inducing the "downstairs" shooters to take part.

Obviously, this is dependent on whether and weather (whether he can attend and if it's raining/snowing as no one likes a soggy target) but, if all things come together, expect to be dragged into trying this challenging yet fun competition.

30/3/22.  Nick R had the honour of firing the first shot in our new rifle comp. Bringing along his nifty wee Webley Jaguar/Ranger (a happy little thing so light that I have heavier pistols,) it wasn't quite up to tight groupings so I offered him a go with the heavyweight FWB 600. 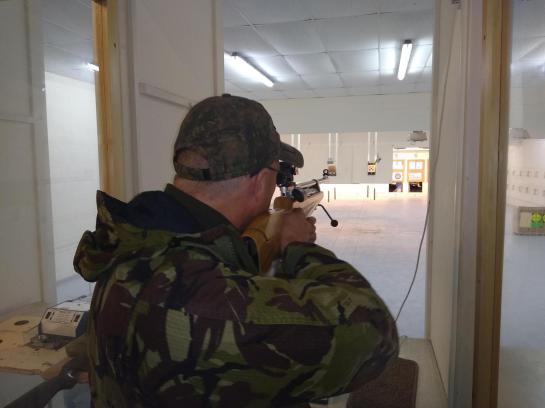 Nick has always proved very adaptable when it comes to shooting guns new to him and, within a minute or two, was putting in cloverleaf groups in the centre of targets. Time to get official then. However, shooting "on the record" brings Competition Pressure with it and his resulting 49 was far below his worryingly high practice scores. Have no doubt that future scores will improve as he gets into the swing of things.

Also taking up the challenge was Paul S. 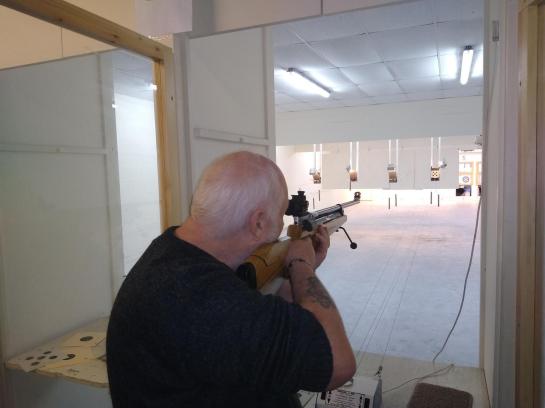 Using the diopter sighted FWB 600 again, a rifle whose weight (4.8kg) is only matched by the lightness (200g) of the trigger, he managed some very encouraging test shots and racked up a respectable 57 - not bad for a first outing at this style of shooting. The rest of the evening, the gears in his head could be seen spinning round, thinking about which of his guns he could press into service for this comp. It's obvious this one has got under his skin and we'll see him back for higher scores.

Captain Chris also had a few warm up shots but couldn't compete due to giving prospective member Trevor a guided tour of what GARC has to offer. He said he's going to be dusting off his AA S200 target jobby for this series. Whether he distinguishes or embarrasses himself remains to be seen but we all know he'll enjoy the banter.

Tail end Charlie was myself. Using my own rifle, it was perhaps no surprise that I benefitted from a couple of month's worth of familiarity and experience and got a 79. Which sounds like a decent lead but, having seen Nick's practice groups, that is in no way something to rely on.

Just four of us had a try but there's clearly a high level of enthusiasm and plans are being made. For those who would like to join in but are unsure of coping with a heavyweight yet subtle brute like the FWB 600, I'm planning to bring along a scoped HW30S to make things more accessible and a bit less daunting.

This is going to be fun so get your name down and have a go.

Here's a competition that can be shot at any of our ranges, one that'll appeal to the membership majority rather than the pistol weirdcore, i.e., rifle shooters.  With a similar format to our pistol comps, the idea is some short and sweet rounds of 10 shots each split five and five over two, 10m rifle, cards. 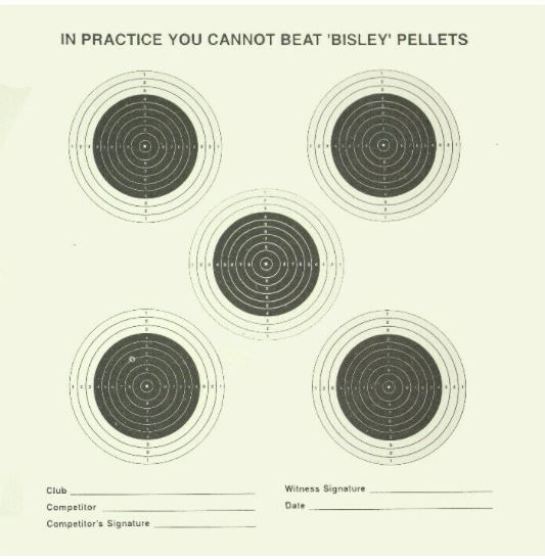 This comp can be shot at Denwood 10 & 50m ranges and at Waulkmill.  Bri will oversee events at Denwood while Steve L will steer the ship at Waulkmill.  Be advised that shooting on the Denwood 10m indoor range can only be done with a 6ft/lb (or thereabouts) rifle as the target holders aren't designed for full power use otherwise you can use any sub 12 rifle.

We'll need a bit of time to sort out some target holders for the outdoor ranges and the finer points of the rules but it's nothing we can't handle.

There's no restrictions on sights so you can use anything you fancy - opens, diopters, scopes and even red dots are all acceptable.

Due to the need for zeroing at 10m, this is a perfect opportunity to dedicate a lesser used rifle to the task and get it out for some exercise.  Alternatively, you can work out your mil-dots/holdover/under if you've only got the one rifle.

You don't need a high tech, big bucks target rifle to be competitive in this as none of us are especially experienced or talented 10m shooters.  In fact, I envisage more than a few surprises with natural talent outshooting the flashier guns.