A companion competition to our Pistol League, this offers an easier experience for those who can't get on with open sights or a one-handed style although there's nothing to stop anyone entering both comps for double the fun.

4/5/22.  Alternating between the Pistol League and Open Pistol comp, Russ was on the HW75 again this week.  High 80s in practice inevitably translated into a still decent 77 once cards were signed though.

He's just acquired a Webley Alecto and a few quick shots showed promise so maybe that'll put in an appearance in the near future.

Bri, intending to use a different pistol in each round, dragged his Original 6M out for some exercise.   Some variable cards resulted - four shots in the white were balanced with more nearer the bull for a 68.

6/4/22.  The Curse of Competition Pressure strikes again as this week was the time for Russ to have a go.  With his open sighted HW75, he shot an excellent 85 in practice but a mere (by comparison) 75 officially.  The unwritten law seems to be that, as soon as you sign a card, things go South.

The same can be said for Steve P.  On one of his far too infrequent visits, he thought he'd have a crack with a CO2 powered Beretta M92 supplied by Les.  With a history of not hitting targets (the M92, not Steve,) it maybe wasn't the wisest choice for this (or any other) comp but with a whaddahell approach, he and the gun threw 10 pellets downrange for a 42.

Les, fortunately, had the wisdom to put Discretion before Valour and declined to shoot officially with it while Nick and Bri ran out of shooting time.

Which leaves Russ at the top of the tree but for how long?

23/3/22.  Continuing his aim of alternating week on/off between this and the Pistol League, Russ racked up a respectable 84 with his HW75 to put him in second place.  Early days yet and I anticipate a few more shooters taking up this challenge to make things more interesting.

16/3/22.  An easy one to update today, just Stef had a blast and racked up an excellent (or worrying to other competitors,) 88.  Mentioning that he far prefers the Olympic Style shooting of the Pistol League, I also think I detected the tiniest amount of disappointment in him with this score.

This man has ice water running through his veins and needs to be stopped - GARC'ers, saddle up, lock 'n' load and give him some oppostion!

2/3/22.  Another two shooters have joined in the Open Pistol comp - Bri and Stef.  Both managed a respectable 85, Stef with his swanky Walther LPM-1 in a two handed stance while Bri broke out his used and abused red dotted HW40, proving that you don't need a top end pistol to get the scores. 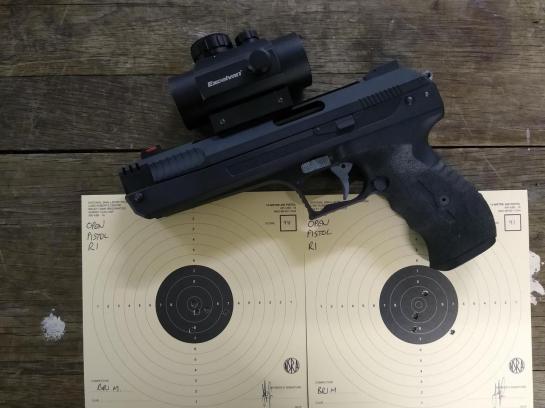 Bri is also considering following the Steve L method of using a different pistol for each round to mix things up a bit and give some lesser used guns an airing.  Probably dooming himself to failure but it should guarantee some fun.

Less taxing than the one-handed Olympic style of the Pistol League, Open Pistol is a good way to get more out of your range time while joining in the craic.  It's open to all (even the mud stained HFT rufty tufties) and fun once you get into it.

Give it a try.

23/2/22.  Russ has fired the first shots in our "Anything Goes" pistol competition.  Intending to shoot this and the Pistol League on alternating visits, he picked up his newly acquired HW75 and got a respectable 78 with open sights - enough to put him in top spot.

Well, it would as he's the only entrant so far.  That may change as others enter the fray and, to this end, I've taken the liberty of putting down a few names for the comp.  It's for your own good and you'll enjoy it once you start shooting.