Shooting one handed too difficult?  Eyesight letting you down with open sights but you still want to take part in our competitions?  Worry not - this is for you.

It's still standing and unsupported but otherwise it's Anything Goes.  Want to shoot two handed?  Yep, just do it.  Rest the pistol on your forearm?  Hell, why not?  Pistol scope or red dot sight?  Bring 'em on!

You could even fit a rifle scope and experiment with the "Taco" grip if you like. 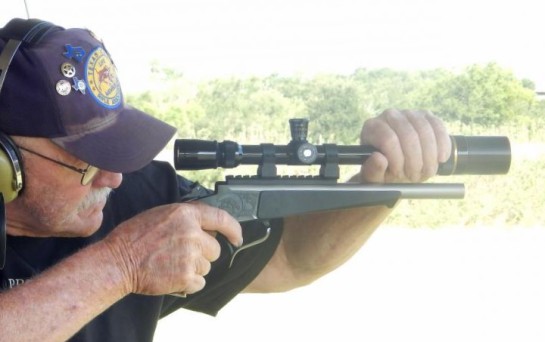 If you fancy having a crack you'll need to get up to the indoor ranges and say hello.  The four lanes on the left are given over exclusively to 10m shooting and there's usually someone on them.  We're a friendly bunch so just express an interest and you'll be invited into the body of the kirk.  There's no forms to fill in or subscriptions/entry fees to worry about as we keep things quite informal.

Don't worry about having a suitable pistol to start with, we'll get something sorted out.

To keep everyone on the same page, it's 0.177 only and no lasers.  Other than that, you can shoot any pistol you like - Springer, SSP, Pumper, CO2 and PCP are all welcome. 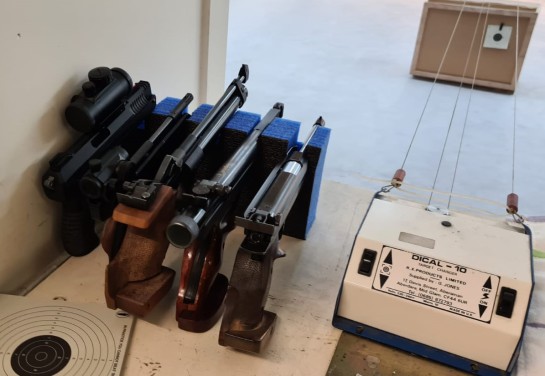 We shoot 10 shots in a round, split five and five on two targets which are also called cards.  The idea of five per card is to make scoring the holes easier. The Club supplies specific targets (NSRA 10m Air Pistol) to ensure everyone's on a level playing field and you should only use these.  You can practice as much as you like beforehand but when it's time to man up and shoot your official entry, you must pre-sign your two cards and announce to your neighbour(s) on adjacent lanes that you're going “on the record.”

There's a couple of reasons for this.  Firstly, it's a declaration of intent, that these cards will be the ones that get counted no matter what your score is.  Secondly, it saves them getting confused with other targets lying around on the bench and, thirdly, it lets your shooting partners know when to stop chatting and let you concentrate.  Good luck with that last bit if Black Tony's in the building.

Once you've signed your cards, put one of them in the “whizzer” and send it all the way downrange.

At this point, I'd recommend setting out your first five pellets as many people have lost count in mid shoot by shooting straight from the tin.  Load, aim and shoot all five in your own time - no-one'll be standing behind you with a stopwatch.  There's no retracting the target until you've fired all five shots and you can't use a spotting scope/binoculars/whatever to see where you're hitting either.

Retract the target and repeat. 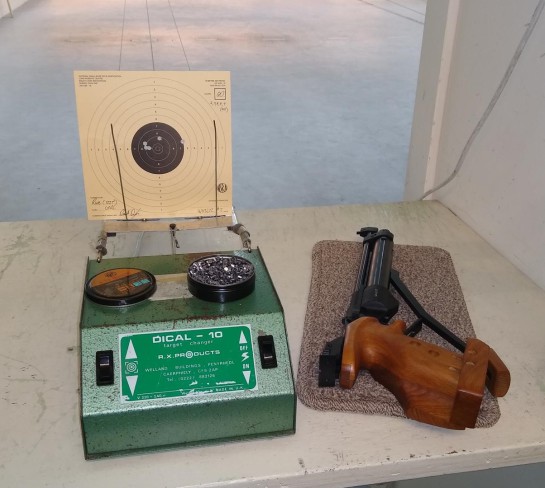 Hand the targets over to someone else for scoring. Bri usually handles this but he's not always there so, instead, have a couple of your fellow shooters check your cards and come to an agreement.

Email Bri (garcweb@outlook.com) with your score (out of 100) then wait for him to post an amended table with all the scores and positions, hopefully with you at the top of the tree, basking in glory, the respect of your peers and their envy.