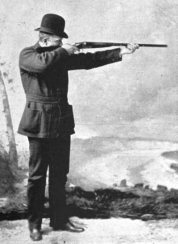 The competition is now open - get yourself over to the GARC Forum, put your name down and join in.

It's free to enter and there's no strict time limits - shoot when you like.

Download and print your targets (the PDF file is in The Rules) and away you go.  Enter as many or as little of the comps as you like.

We're going to try something a little different this year - monthly competitions.  The June '21 comp is open so get stuck in.  There's not much in the way of prizes but what price Street Cred, the respect of your fellow shooters and bragging rights?

Entries close on the last day of each month and you can keep up to date with happenings on the dedicated GARC Forum page.

On the face of it, there's not a huge gulf between their scores for this opening round but these things tend to tell later on.  With that said,  I'm sure this one'll be closely fought - Stoof will not let Alex rest on his laurels and Steve's due a win...

It's also interesting to note the rifles used here - a handmade Ripley AR4 and a very humble Weihrauch HW25.  Guns at two ends of the airgun spectrum and yet the scores are very similar, proving that it's skill not kit that counts

14/6/21.  Steve puts his first two cards in, an excellent 28 and a bittersweet 27 achieved with nine 3s in a row followed by a zero - enough to make a grown man cry into his martini.

30/6/21.  Steve was due a win and not only does he get the Rifle top spot but the Open Pistol as well - good shooting Sir!

Standing and unsupported.  No slings for steadying.

The range should be as near to 6 yards as possible.  A little under is ok as is a bit further if you need more distance for a scope to focus.

Only use the GARC pdf target sheets. 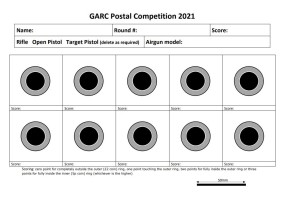 Score the target yourself.

Completed entries to be photographed and emailed to garcweb@outlook.com.

Honesty is the key here so, after practicing, commit yourself to shooting an official entry then submit it warts 'n' all - no shooting a dozen sheets then entering the best!